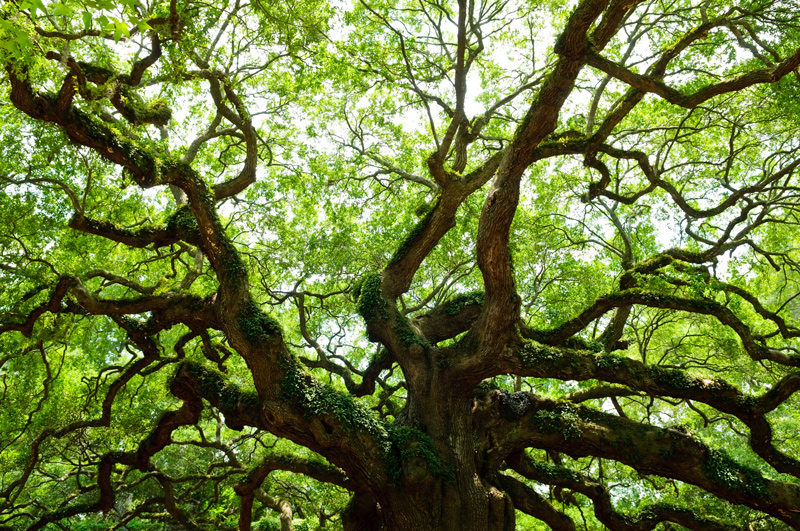 New Jersey is known to its residents as the garden state. Non-residents often associate scenes of the parkway or turnpike with the state. But New Jerseyans know of the lush gardens, rolling hills, and beautiful trees our state has to offer. As one of the first American colonies, it makes sense that there are so many historical trees in New Jersey.

At 243 years old, the United States boasts a very rich history for its young life as a nation. Much of its lessons lie in old churches, historic roads, and colonial settlements. These landmarks only exist in the northeast because of its early development.

However, there are other much older historical markers that deserve preservation and appreciation. In New Jersey, you can find tree giants whose roots you can easily trace back 300, 400, even 500 years.

Take a look at some of the oldest and most historical trees in New Jersey:

The Belvidere Shoe Tree is located on Oxford Street in Belvidere, NJ. This historical tree is a 350-year-old oak. It earned its name as the place where people from the country would stop to put on their nice shoes before attending church.

A magnificent sycamore stands on the front lawn of the Swayze Inn Farm in Hope, NJ just off Route 519. According to folklore, George Washington was traveling from Philadelphia to New York in July of 1787. The first president of the United States is said to have taken refuge from the sweltering heat under this giant’s shady canopy during this trip.

In Washington’s day, the tree had already been around for two centuries. It is estimated that the tree is 400+ years old.

In Hillsborough, NJ, you can find the State Champion Red Oak at Duke Farms. In 1950, the Red Oak became the state’s official tree. This specimen sometimes referred to as “Forrest Gump,” is believed to be 309 years old. Interesting to note,

Duke Farms is also home to four of the ten oldest trees in New Jersey.

The Council Tree of Bound Brook

The Council Tree, otherwise known as the Council Oak, is over 350 years old. The tree is in Bound Brook, NJ, off Mountain Avenue. This oak was the meeting site of local settlers and two Indian chiefs. At this meeting, there was an agreement to sell the land to the settlers in 1681.

The Council Tree was also an important landmark for George Washington and his troops. This group of famous men were stationed only a mile away in 1778.

The NJ Division of Parks and Forestry catalogs trees of noteworthy size, age, and historical significance into an official register. On this list, you’ll find a 400-year old white ash that calls Madison, NJ its home.

This white ask began life as a sapling in 1625. It has survived disease, insects, deforestation, several wars, and urban development.  It earned the title of the largest white ash tree in the entire country due to its long history of survival,

The Salem Oak was a behemoth of a tree and held the title for the largest white oak tree in the entire state. The tree was located on West Broadway in Salem NJ. Local tradition says in 1675 the town’s founder, John Fenwick, negotiated a peace treaty with the Lenni Lenape beneath this tree.

The Salem Oak tree stood 104 feet tall and was over 500 years old. A single limb likely weighed approximately 6,000 lbs. Sadly, this tree was uprooted on June 6th, 2019. At such an old age, much older than most trees of its kind that last around 200 to 300 years, its health had been declining for over 100 years.

Attending Rutgers form 1904-1906, Joyce Kilmer found a home and muse in is his alma mater. After writing a very famous poem called “Trees” many places tried to claim their tree as his inspiration.

After years of arguing, it was universally agreed upon that a 200-year-old white oak on the Rutgers campus was Kilmer’s great inspiration. The Kilmer Oak later died in 1963 and had to be removed shortly after.

Old Peppy is a shining example of how beloved a tree can be to its community. Residents staged a protest over the removal of this tree, but it had to be taken down in 2015 for safety reasons.

The 250-year-old pepperidge tree was beloved for being part of the John Denman estate. He was one of the first settlers to make it to this region. Wood from this tree was also used to refit the U.S.S Constitution.

No other tree listed has quite as strong a history behind its name. The Mercer Oak got its name from General Hugh Mercer who died under the tree on January 3, 1777. After suffering an injury in the battle of Princeton, Mercer refused to leave his men.

The Mercer Oak was removed in 2000 after 300 years. In the place of the famous tree, an acorn was planted from the tree to continue its memory.

The beauty and history of these trees will live on forever in memory. While you have the chance, we recommend taking a trip to see some of the remaining trees.

Walking under these magnificent specimen gives you a feel for the events that transpired. You may also gain a new appreciation for the natural beauty found in New Jersey.

It’s doubtful you’ll find anyone with more of a passion for tree care than Justin Shaw. To him, removing a tree is always the very last resort no matter how difficult and challenging the effort to preserve it. Though he has degrees in finance and economics, Justin decided to follow his passion and with an additional degree in urban tree management, launched Trees Unlimited, LLC in Wayne, NJ. Justin is also a Certified Arborist and Certified Tree Safety Professional.

Related posts
Warning Signs and Prevention of Tree Termite Infestation
July 26, 2019
4 Ways to Maintain Healthy Soil in New Jersey
June 27, 2019
Growing Cherry Trees in New Jersey
June 21, 2019
A Homeowners Guide to Tree Trimming Basics
May 29, 2019
How to Choose and Maintain Shrubs in New Jersey
May 14, 2019
Does My Tree Need to be Removed?
April 30, 2019
Recent News
Services